Lost Butte, Montana, a book by Richard I. Gibson, is in stores and museum gift shops around Butte. Or order from the publisher. It's also in E-book formats at all the usual places. And read an interview with Gibson, here, and on KXLF here. The Facebook page has many historic photos of Butte, and the Butte-Anaconda NHLD project showcases many historic buildings. Location-oriented posts can be found on HistoryPin. On Mondays beginning in January 2016, look for Gibson's "Mining City History" column in the Montana Standard.

What Was There? Quartz and Main 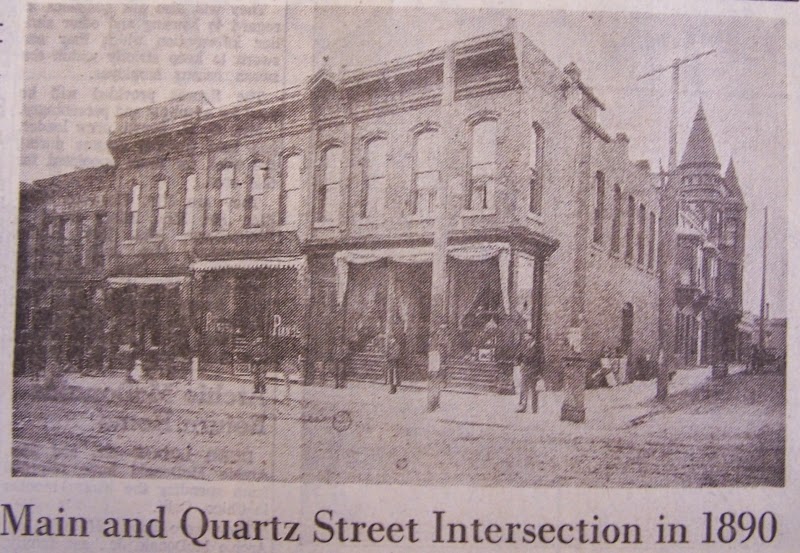 The southwest corner of Quartz and Main Streets in 1884 was a half-block west of the first house in Butte, and a half-block south of the new Miners Union Hall that was under construction. The buildings facing Main, south from Quartz, had a wholesale liquor store, druggist, and jeweler in a 1-story building under one roof made of tin. Just south of that was Butte’s Post Office, with club rooms on the second floor. Next door to it was a dry goods store with the Odd Fellows hall above.

In 1885, the 1-story building on the corner either was torn down and a new 2-story building built, or the original had added a second floor. The footprint is almost identical to the 1884 plan, so I suspect a second floor was added as was a common practice in booming Butte.

Either way, the façade on the corner building (called the Leyson Building after 1885, for J.H. Leyson, the jeweler in one of the storefronts) was combined with the next building to the south, the former Post Office. The ground floor held Jimmy Lynch’s saloon at the corner (“one of Butte’s most famous”), the druggist, and Leyson & Truck jewelers in the northern block.

The adjacent building held J.E. Rickard’s Paint Company on the ground floor (you can see the sign for “Paints” in the 1890 photo above). It later became Charles Schatzlein Paint Co. Among more conventional paints, Schatzlein was also the supplier of paints and oils to artist Charlie Russell in the 1890s, and he also sold Russell paintings. Nancy Russell wrote for Charlie in 1902 that “Mr. Schaztlein has done more to raise the prices of my pictures than any friend I have.”

John Rickards, born in Delaware in 1848, came to Butte in 1882. He was elected the first lieutenant governor and second governor of Montana, serving as the governor from 1893-1897.

The second floor above Rickard’s Paint Store, which was interconnected with the building to the north, held the Silver Bow Club’s rooms. The third building to the south was also connected to those to the north in terms of its façade, as you can see in the photo. That third store was Goldsmith’s men’s clothing (later Siegel Clothing), and the IOOF still met in the room above.

In the right side of the photo, on Quartz Street, the turrets mark the Beresford Building, built in 1891 (so the photo caption above is in error by at least a year). It was built primarily as a 3-story lodging, but there were two stores on the Quartz Street level, including C.E. Miller’s Glass Store. The lodging was commonly known as Mrs. Armstrong’s Boarding House for the manager. The Beresford had its own boiler. The boiler for the corner building was beneath the Quartz Street sidewalk in the sidewalk vault.

In the lower left part of the photo you can see tracks. They are not the tracks for the electric trolleys that operated all over Butte until 1937, but are part of the cable line that served Butte from about 1888 into the early 1890s, when the electric trolleys replaced it. The cable line here, on Main, ran from Galena and Main up Main Street until it reached the Lexington Mine. It went up an alley west of the Lexington to Daly Street in Walkerville. The streets are unpaved in this photo.

This photo was published in the Montana Standard April 3, 1960. It was owned by Robert Logan, internationally known singer and janitor at the Miners Bank until his death in 1945.


All these buildings are gone today, represented by the small modern shop on the southwest corner of Quartz and Main, together with its parking lot and the parking lots behind the NorthWestern Energy building and the Montana Standard. The corner building was demolished before 1951, and the rest were torn down after 1960.