By Richard I. Gibson

Twenty-one men were killed February 14, 1916, in a fire at the Pennsylvania Mine. The Pennsylvania stood at the eastern ends of Broadway and Park Streets, where Parrot Street intersected. That location is within the Berkeley Pit today, about 1,000 feet directly in front of the viewing stand on the rim, as you look across the pit. 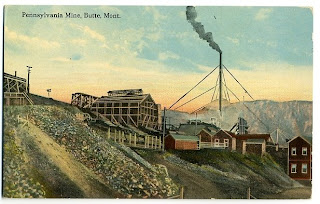 In 1916 the Pennsylvania was one of the major mines, with at least 41 separate structures on the site, ranging from an ice house to the two-story, 40-foot-long change house or dry. The mine was established by 1887 by “Sheriff Lloyd, his brother, and the Harris boys” (Butte Miner, Nov. 28, 1888) and sold in early 1888 to the Boston & Montana Company, with the Lewisohn Brothers of New York among the principals. By 1899, the B & M was part of the Amalgamated (Anaconda) and the stage was set for one of the main battles in the War of the Copper Kings.

Amalgamated owed the Pennsylvania and the nearby Michael Davitt, but Augustus Heinze controlled the Rarus, immediately to the northeast. On December 28, 1899, Judge Clancy had decided the Pennsylvania vein was owned by Heinze’s Montana Ore Purchasing Company, setting up additional lawsuits. Ultimately, the Pennsylvania became the scene of some of the actual underground warfare as well as legal wrangling, until 1906 when most of Heinze’s properties were acquired by the Anaconda. See The Battle for Butte for more of this story.

On February 14, 1916, 220 men were in the Pennsylvania Mine when the fire broke out, probably on the 1200 level near a ventilating fan at an air-shaft station, at about 9:00 p.m. The ultimate cause was never known with certainty. It might have started from an abandoned miner’s candle, or from an electrical short. 195 men were hoisted from the mine within 30 minutes. Five others escaped through the Tramway Mine, whose shaft was nearly a half-mile from the Pennsylvania, and one got out through the Mountain View. Nineteen men were unaccounted for, and were later found suffocated on the 300 level. Two rescuers, wearing Draeger breathing apparatus, also died, probably because the devices were insufficiently charged with oxygen.

The fire was not fully extinguished until April 5. Concrete bulkheads were constructed to protect interconnected mines from the smoke, and extensive mining work was necessary to control the blaze.

Following the Pennsylvania Mine disaster, the Anaconda Company instituted many safety improvements, including installing 2-inch sprinkler lines on all shaft collars, and establishing a new “all out of the mine” signal—nine flashes of all lights, repeated three times, followed by the signal for the level where the danger was located.

Resources: The Battle For Butte, by Michael Malone (U. of Washington Press, 2006, especially pages 144, 168, 172, 179-81); The Underground Battle of the Miners, by C.P. Connolly, McClure’s Magazine, May 1907; The Pennsylvania Mine Fire Butte, Mont., by C.E. Nighman and R.S. Foster, Transactions of the American Institute of Mining Engineers, vol. 57, 1918 (source of underground mine map). Nighman was the Fireboss and Foster was the Safety Engineer for the Anaconda Copper Mining Co. Photo of miner with Draeger apparatus at a Pennsylvania coal mine, from Library of Congress, Lewis Hine, photographer, January 1911. Surface photo from A Brief History of Butte, by Harry Freeman, 1900. Post-card view circa 1905.
Posted by Richard Gibson at 9:08 AM

Email ThisBlogThis!Share to TwitterShare to FacebookShare to Pinterest
Labels: 1916, Heinze, mine, Pennsylvania mine