Thomas O’Neill was born in Butte November 14, 1898, and attended Parochial schools, graduating from Butte Central. He dropped out of Mt. St. Charles College (Carroll) in Helena to enlist in the marines in 1918, and following the armistice worked as a machinist for 16 years; for fun he played football for the Dublin Gulch and Centerville teams. In the summer of 1934 he joined the Butte police force.

Tom’s father, John P., was well known to Butte as “The Rimmer.” He was superintendent of the Anaconda, Neversweat, and St. Lawrence mines in the 1910s and 1920s, and drowned tragically at Boulder in 1924. His widow, Tom’s mother, was expecting Tom at her house for dinner about 4:30 Christmas Day, 1935, but he never arrived.

Two more Christmas dinners were about to be served earlier that day, in apartments at the Merriam Block, 538 S. Main Street (a parking lot today, across from the Scandia Bar). The boardinghouse manager, Betty Clifford, was entertaining her daughter and son-in-law, Mr. & Mrs. Frank Walsh, and a friend of the Walsh’s, Bob Clark. Frank was assistant manager of the New Market and Safeway store on Harrison Avenue.  Next door, Florence Benevue was preparing dinner for her sister Jean Miller when William Henry Knight appeared at the door demanding to see Jean. Florence sent him away—knowing him to be an ex-con who had beaten Jean repeatedly in the past, though he was also a sometime resident in the house. He returned with a gun, while Florence was seeking help at the Clifford apartment. Frank Walsh ran across the street to the Scandia, where former policeman Harry Kinney and Walsh summoned the police.

Tom O’Neill and James Mooney responded to the police call. When they arrived at the Merriam Block, they found Mrs. Benevue shot and Knight gone to his room at the rear of the building. O’Neill, Mooney, Walsh, and Kinney charged his room, to be met with gunshots. O’Neill was killed instantly; Walsh died from his wounds later that night. Mooney was badly hurt but survived, and the shots aimed at Kinney missed him.

Knight fled. Using stolen vehicles and on foot he made his way up the Madison River where he killed Floyd Woods, a ranch caretaker, then worked his way through Ennis and eventually back to Butte on December 27 after an attempt to reach a hideout in the hills above Anaconda failed because of heavy snowdrifts. He went to a house at 11 S. Oklahoma (parking lot of the WET building on East Park today), where lived Knight’s acquaintance, James Gilligan, who worked for Knight six years earlier, at the Montana Cafe. Gilligan was gone to work for the WPA on the Thompson Park project when Knight arrived. He held Hazel Gilligan and her children, age 5 and 2, hostage all day until James returned home. Then, somewhat inexplicably, he allowed the family to take the children next door, where they promptly called police. 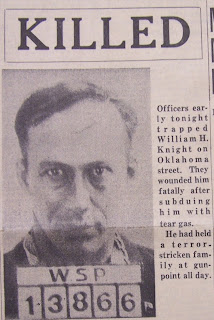 A tear-gas barrage cornered Knight in the house, and assistant police chief Jack Duggan shot him down in the house when he assailed the police with a hail of bullets.

Knight had also killed deputy sheriff Tom Meahan near Seattle six weeks earlier. He had bragged to Jean Miller about that murder, and it was speculated that one reason for the Christmas Day encounter was Knight’s fear that Miller might implicate him in that death; Knight was also believed to be addicted to narcotics.

Tom O’Neill was living at 22 N. Main Street when these events occurred, in an apartment upstairs in the 3-story building south of the BS Café-Rookwood Speakeasy, with the Ley’s Jeweler Ghost Sign. His mother’s home at 417 N. Wyoming (corner of Copper) is also still there; she probably moved to that location after her husband John “The Rimmer” died—before that, they lived in the last house up the Anaconda Road, a stone’s throw from the Anaconda Mine itself. Frank Walsh, age 24, and his wife lived at 2401 Harvard Avenue, another house that still stands. Officer Mooney’s home, at 919 S. Utah, a half block above St. Joseph’s Catholic Church, is still there as well. Even the duplex at 633 S. Main, where Harry Kinney lived, is still standing. But the sites of the most deadly action, 538 S. Main and 11 S. Oklahoma, are gone.

Officer O’Neill’s portrait is part of the collection of plaques honoring fallen officers, in Dan Hollis’s collection, which can be seen in the City Jail on an Old Butte Historical Adventures walking tour.