Booker T. Washington (1856-1915) was a prominent leader and spokesman in the African-American community from 1890 until he died in 1915, traveling the country to promote the cause of education and schools for African-Americans. He gained support from and became friends with a long list of prominent backers, including William Howard Taft, Teddy Roosevelt, Sears Roebuck president Julius Rosenwald, and Standard Oil’s Henry Rogers—the co-founder of the Amalgamated Copper Mining Company, which evolved into the Anaconda.

Washington came to Butte on March 6, 1913. He arrived as the white supremacist governor of South Carolina, Coleman Blease, was announcing that Negroes in that state would not be tried for alleged assaults on white women (conviction would be automatic), nor would those who lynched them be punished. He also famously advocated beer over Coca-Cola as a refreshing drink—in his inaugural address as governor. In Butte, Washington tactfully refrained from saying “what I think of Governor Blease,” but he lauded the good works of Alabama Governor O’Neill: “My race is getting a square deal in his state.” Alabama was (and is) home to the Tuskegee Institute that Washington made famous. 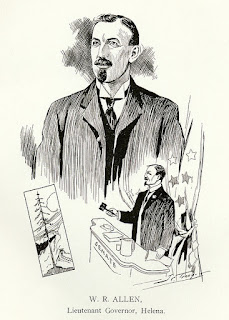 A welcoming committee from the Colored Progressive League met Washington’s train in Butte. He was given an automobile tour of Butte (including a surface visit to the mines) that ended at his hotel, the Thornton, where he expressed surprise that all of Butte’s people were not covered with icicles—this was his first trip to the Northwest. Introduced by former Montana Lieutenant Governor W.R. Allen, Washington delivered his speech that evening at the Auditorium in the old Butte Public Library on West Broadway Street to “a large audience about equally divided between the white and black races,” according to the Butte Miner. The presentation was followed by a banquet in Washington’s honor at the African Methodist Episcopal (AME) Church, Shaffer Chapel at Platinum and Idaho.

Shaffer Chapel, built in 1901, still stands today; it was reportedly a gift to the African-American community from W.A. Clark. It was the second home to the AME congregation in Butte. That group built its first church at Idaho and Mercury (where the fire station is today) in 1892, but after they moved to Shaffer Chapel, the original building became home to the Baptist Bethel Church which also served African-Americans.