When Harry Danz and Solomon Spier arrived in booming Butte in 1915, they were probably full of entrepreneurial spirit and energy. But you’d have to wonder if they imagined that the business they were about to establish would still be operating in 2013.

Danz & Spier, clothes pressers, began at 330 South Main, about where Naranche Stadium stands today. They both had lodging rooms in a four-plex at 670 South Montana that still stands, just north of Aluminum Street. By 1917, Danz was out of the picture and Spier was partnered with Max Tover—both worked as tailors from the shop at 425 North Main, where Spier also lived. The Marcus Daly statue was right outside their front door.

Spier continued at 425 N. Main until 1926, although Tover seems to have moved on within a year. In 1926-27, Spier moved a block south to 305 North Main, where again he both lived and maintained his tailor shop. He was located on the first floor (north side) of the three-story Neely Block, demolished in 1970 under the Model Cities program and today represented by the parking lot east of the new Archives building. About this time is when he adopted the moniker “The Town Talk Tailor.”

About 1929, Solomon Spier’s son James took over the business, and relocated to 24 North Main (today’s BS Café and Rookwood Speakeasy). In 1929 James was also a student at the Butte Business College and resided somewhere in the Rookwood Block at 24 North Main—one must wonder if that was his home in March 1928 as the only known Prohibition raid took place there, when Federal officers arrested Curly McFarland in the illegal basement speakeasy.

Jim Spier, The Town Talk Tailor, moved the business twice. By 1934 he’d moved a half-block south, to 6 North Main (part of the Owsley Block, later the Medical Arts Center), and in 1939 he crossed the street to 17 North Main where the business would remain for the next 74 years. In 1956, Spier sold out to his clerk, Ernest C. (Chuck) Richards who purchased the clothing business with financial backing from Remo Rochelle, a photographer. Spier continued working for the company for one more year, living with his wife Julia at Apt. 404 in the Tripp and Dragstedt Apartments in the 400 block of South Main. The name Richards & Rochelle replaced Spier’s in 1956.

In 2013, Chuck Richards and his son Ernie decided to close the store, ending the 98-year continuous run of this clothing business, albeit under a variety of names and locations (all on Main Street). A liquidation sale will take place during February 2013. Update: on March 9, 2013, a grand community celebration was held in honor of Chuck and Ernie. Photo by Scott Parini. 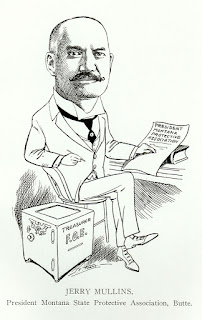 The building at 17-19 North Main occupied by Richards & Rochelle in 2013 was built about 1924. Gamers Shoe Store held the location for several years in the late 1920s; Brinig’s Shoes (run by Myron Brinig’s uncle, I believe)  was there in the late 1930s. The predecessor building at this address, erected about 1890, was initially Lennon & Walker’s Saloon. Later Jerry Mullins (born Quebec, 1858, of Irish heritage) had his saloon there for many years (c. 1900-1912). Mullins was a city alderman in 1907, and was also Secretary-Treasurer of the Tivoli Brewery; Mullins’ saloon was essentially the main uptown outlet for Tivoli products. Despite his connection to the brewery and owning a saloon, Alderman Mullins opposed the “immoral” stage productions of the day (see Mining Childhood by Janet Finn, p. 167 ). Mullins lived at 216 S. Washington. I have not determined whether or not he was connected to the massive Mullins House in Centerville, but it seems likely. Mullins was also president of the Montana State Protective Association (related to liquor businesses) and president of the Pittsburgh-New York Copper Mining Company, which owned the Umatilla Mine at Marysville together with claims on Timber Butte south of Butte, but the mining company was “in debt and idle” in 1910.