By Richard I. Gibson

In 1902, the main post office in Butte was at 30 East Broadway, in the building that today is the westernmost of the buildings occupied by Northwestern Energy. The city had three substations, one at 905 East Front, one at 938 North Main in Centerville, and one at 1011 Talbot, on the East Side (Talbot was the continuation of Mercury Street). 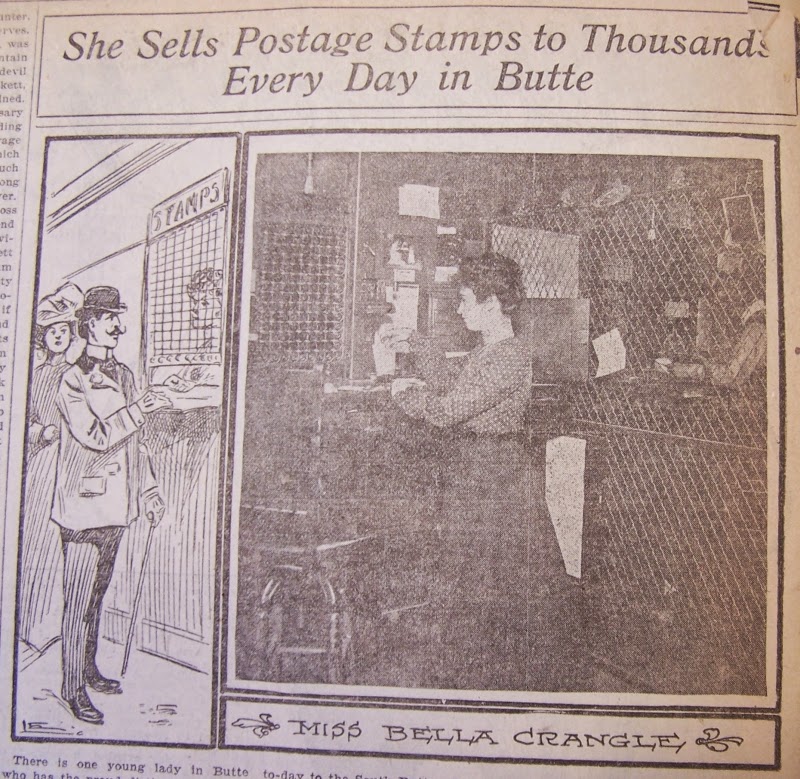 The chief stamp clerk for the post office on Broadway was Bella Crangle. She graduated from Butte High, and went to work in the stamp department in 1898. The Anaconda Standard (April 27, 1902) gave her “the proud distinction of having met every man, woman and child of every nationality, color and creed in the city” in the course of her work. She was up on rates to all nations – necessarily, given what must have been a vast quantity of mail being sent from Butte to Europe and other parts of the world.

Miss Crangle lived with her siblings and their mother Mary, a teacher, widow of Edward Crangle, at 412 West Granite, a house that is still standing. By 1910, after the death of Mary, the siblings – Bella (still with the post office), Edith, Stella (a stenographer with Lawlor & Rowe, a real estate company), and Edward (a machinist at the Tramway Mine) were living together at 330 North Montana Street, a boarding house where the new county jail is located today. In 1918, Bella, still the stamp clerk, was living in the Leonard Hotel.

As a postal clerk in 1902, Bella Crangle was paid $75 a month and had 15 days of paid vacation annually. The average revenue from sales of stamps, stamped envelopes, parcel shipping, and such was about $225 per day in 1902. LOTS of people must have been mailing things – and remember that the first class postage rate in those days was 2¢, while penny postcards were, not surprisingly, a penny.

Bella’s boss, Postmaster George Irvin, said “her work is of the best.” No errors in counting out stamps had ever been blamed on her, even though some of her work was on contract – businesses would purchase stamps in advance to pay for their postage due mail, which Bella applied, so mail was sent on to the businesses without need to come pick it up. There’s service for you.

Postmaster George Irvin lived at 221 North Idaho, on the southwest corner of Quartz Street – another house that is still standing.

In 1904, the new Federal Building and Post Office was constructed on North Main Street, and the East Broadway post office closed.