The popular collectible miniature Indian dolls called “Skookum Indians” were invented in Missoula by an entrepreneurial widow, Mrs. Mary McAboy (1876-1961). A year after her husband Frank died in 1912, Mary created miniature Indians using a stick wrapped in straw or grass for a body and dried apples (red MacIntosh was favored) for heads. Small swatches of fabric wrapped the figure in a blanket and provided a hat. 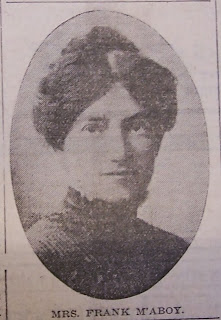 Maine-born Mary McAboy started the business in Missoula in September 1913, and by December had three girls helping her, working overtime to keep up with demand. They made more than 1,500 before Christmas 1913, and had an order for 10,000 of the figures to go to the Montana exhibit at the Panama-Pacific Exposition in San Francisco the next year. Mary applied for and was granted a patent on the dolls in 1914.

Although Mary made the first dolls for a display in Missoula where she lived, it may have been the prominent collection in an East Broadway store window in Butte in the run-up to Christmas 1913 that provided enough impetus for the business to expand.

By the 1920s, the dolls were so popular Mary partnered with a Denver company, but she stayed the head of the Skookum Assembly Division, retiring in 1952. The dolls were sold as popular tourist souvenirs throughout the American West into the 1960s. Materials changed – plastics and other materials instead of apples – and the business thrived. Today, prices for Skookum dolls from the 1920s-1940s bring $500 and more from collectors.

Posted by Richard Gibson at 2:13 PM