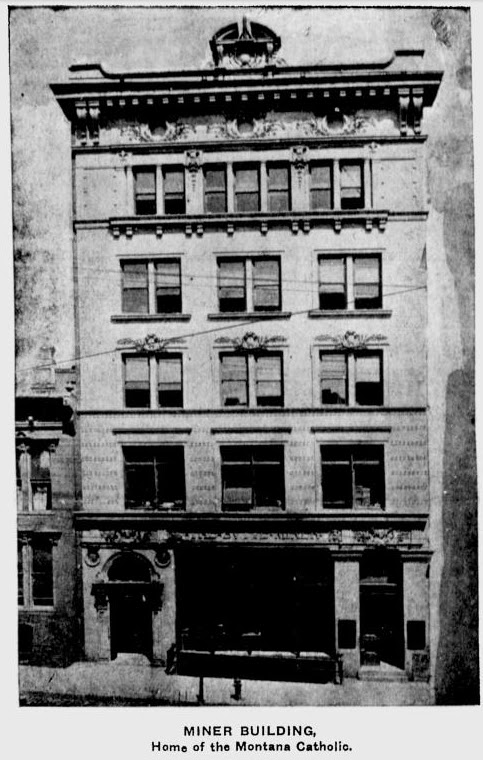 Although later Sanborn maps say the building that stood here was built in 1898, the 1900 map shows three vacant 1- and 2-story dwellings “damaged by fire,” and I believe that the 5-story Miner Building was erected in late 1900 and 1901. News reports have the foundation being dug in August 1900. At about the same time, the Butte Miner also constructed a smaller building further west, at 121-125 West Broadway, to serve as corporate offices, and the two new buildings together replaced the small one at 27 W. Broadway, which the Miner had certainly outgrown by 1901. The Miner used 121-123-125 W. Broadway as its masthead address starting December 1, 1901, when they ran a front-page announcement of the “new and enlarged Miner.”

The Miner Building was built like a skyscraper, with a steel frame supporting concrete floors and the roof. In addition to editorial offices, this was the printing headquarters for not only the Butte Miner, but other publications that used the Miner’s equipment. One example is the Montana Catholic, published from here in the early 1900s. The building also housed offices for accountants and attorneys.

In 1928, three years after W.A. Clark died, the squabbling among his heirs was over, and his son Will (W.A. Clark, Jr.) had lost. All of Clark’s assets, including the Butte Miner and its two buildings, went to the Anaconda Company, and the Anaconda Standard newspaper took over the Miner; the combined paper became the Montana Standard which had offices in this building into the early 1960s.

Toward the end in 1928, all of Clark’s surviving companies had their offices here, including the Elm Orlu Mining Co., Timber Butte Milling Co., Moulton Mining, the Clark Law Library, Clark-Montana Realty Co., and the Butte Electric Railway Co. (the trolley service), in addition to the Butte Miner. All were headed by W.A. Clark, Jr., in 1928 until the August takeover by Anaconda, and most were on the upper floors of this building.

Immediately to the west (left in photo at top) was the Empress Theater* which burned in 1931 and was demolished in 1935 to create a pass-through gateway for Greyhound buses. The Miner Building was demolished in 1965 to expand the bus pull-through, and the present parking structure was built in the early 1990s after the bus station moved.

*second of that name; originally the Lulu, then called the Orion; renamed the Empress when the Empress across the street, in the Maguire Opera House building, burned in 1912; the opera house was replaced by the Leggat Hotel.