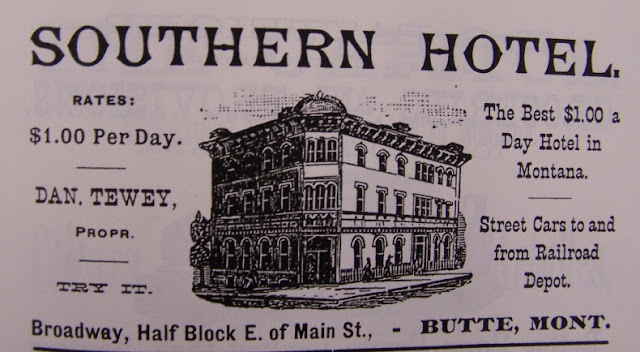 The north side of the first block of East Broadway held prominent hotels for many years (see this post on the Butte Hotel). In mid-block, at 41-43 East Broadway, the longtime lodging house was the Southern Hotel.

In 1884, the US Restaurant and Lodging House stood at this location, an elongate two-story wood building. By 1888, it had evolved into the Southern Hotel, with a hodgepodge of connected (and some disconnected) log buildings serving as rooms, attached to the core which was the old US Restaurant. By 1890, a new, narrow three-story building was erected west of the original two-story section. I believe, but I’m not certain, that this three-story structure forms the core of the existing CPA office on East Broadway.

This is a great example of a building whose story would be better told if we had some Sanborn maps from the mid-1890s. But we only have 1890, 1891, and 1900. It seems that the present building probably appeared about 1892, when a third story was likely added to the original two-story to the east, and it was connected to the three-story section on the west. The present façade probably appeared then, or perhaps a few years later. The advertisement above, from the 1890s, shows the hotel as if it were on a corner—which it was not, but the lot to the west was empty for a time after the three-story section was built, and the angled corner may reflect that original geometry. By 1900, the corner was square and the modern façade was almost certainly in place by then. The two sections are not identical, making the present façade asymmetrical, and there is a large light well separating the two sections behind the front.

The first proprietor, Dan Tewey, was a miner who was in Butte by 1885 when he worked for the Montana Copper Company, the business incorporated in 1879 by the Lewisohn Brothers of New York. Tewey ran the hotel until around 1905. In 1910 William McCarthy and Harry Harms managed it; in 1928, the place was “furnished rooms” with Mrs. Margaret Loveland as proprietor. At various times, the Southern Hotel also used the upper floors of the Forbis Block to the east (today’s Uptown Café).


In August 2013, the sidewalk was removed, in anticipation of filling in the vaulted space below. This revealed a spectacular under-the-sidewalk storefront, with cast-iron columns, windows, and doors. The differences between the eastern and western sections are noticeable: to the west, the vault is several feet narrower than the one to the east. Details of masonry show attention to detail, suggesting that this may have been one of the sub-sidewalk spaces that were retail storefronts with public access from the sidewalk, but there is no obvious evidence of descending stairways, nor do the old maps have any suggestion of such stairs (but the maps often omit such detail).

What is apparent is that these vaults, like most in Butte, were absolutely limited to the front of each building—there are solid granite block walls at either end of the vaults, as well as another at the join between the two buildings that constituted the Southern Hotel. There was no interconnection along the block, and like most of the vaults, they were private to the adjacent buildings. There was no promenade, no connected underground city with people coming and going as if they were on the surface.

The sidewalk repair removed some of the last surviving purple glass bricks in place in Uptown Butte. The owner has asked to keep them; there is at this writing some debate as to whether or not the vaults will be filled in (the plan at present) or preserved (my preference, of course, as well as that of Mr. Prigge, co-owner of the building). Stay tuned. But whatever happens, this work has revealed an outstanding example of a sub-sidewalk space. Check it out while you can.

UPDATE: August 26: The owner, Leo Prigge, indicates that as of now, barring some insurmountable engineering problem, these vaults will be preserved. Great news, and thanks to the Prigges and the URA which funds 90% of vaulted sidewalk restoration for following through and saving a very cool aspect of Butte history. Thanks also to Marissa Newman for advocacy!