“Alas! Alas! What woe it wrought! What pain, what sorrow, what blight to human hopes! Only the recording angel, with pen dipped in tears, can truly write the story of that awful night.”


January 15, 1895, a deadly date in Butte history: the multiple explosions of illegally stored dynamite in the warehouse district. Almost the entire Fire Department was wiped out.

Dave Magee, hose-cart driver, was one of only two of the nine fire fighters who responded to the call and survived. And the story of a horse named Jim who saved Magee is true—Magee was blanketing the horses against the cold when an explosion threw one horse into him, killing the horse and injuring Magee. The protection offered by both the dead horse and Jim the survivor saved Magee’s life. Jim subsequently became an icon of the Fire Department, and of Butte.

Magee was so severely injured that he could not drive the wagon, but he rode in the 3,000-member procession that honored the fallen fire fighters and the many more volunteers and bystanders who died that cold January night. The final count will never be certain, because the violence of the explosions literally destroyed human bodies, but the most common count is 58 dead. This was, I believe, the second most deadly event in Butte’s history, second only to the Granite Mountain Disaster in 1917.

A contemporary list of the dead reveals a microcosm of Butte: 56 white, 1 colored. Forty single men and boys, 14 married, 1 widower, 2 unknown. Six from Germany, four from Ireland, five from Canada, two from England, one from Norway; native-born Americans were from New York (8), Pennsylvania (3), Utah (2), Montana (2), and one each from Dakota, Minnesota, and Ohio, with 21 whose nativity was unknown. The ages of the dead ranged from 12 to 78; at least a dozen teenagers were killed. Twenty-two others were in their 20s. 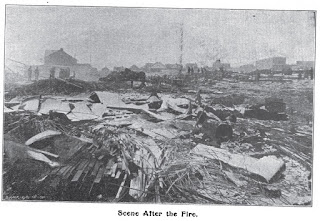 Research note: There’s always more to learn. I’d been saying that there were three survivors within the Fire Department (because that’s what I was told years ago), but the contemporary accounts make clear that there were only two. Besides Magee, the other survivor was John Flannery who was manning the plug, well away from the force of the explosions.

Resources: The Great Dynamite Explosions at Butte, Montana, January 15, 1895, by John Francis Davies, 1895 (scanned by Google—source of map, quote at top, and image of devastation); Souvenir History of the Butte Fire Department, by Peter Sanger, Chief Engineer, November 1901 (scan by Butte Public Library—source of photo with Jim the horse).
Posted by Richard Gibson at 8:14 AM