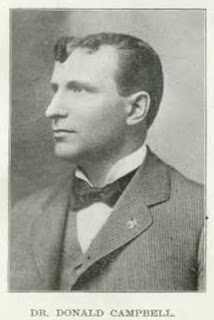 Donald Campbell was born the sixth of ten children November 1, 1862, at Marble Mountain, Inverness County, Nova Scotia, in western Cape Breton Island on the shores of Bras d’Or Lake. His parents were from Inverness and Southerland shires, Scotland, but had been in Nova Scotia since their infancy. In 1883 he emigrated to the U.S., to Massachusetts, where he worked in mental hospitals. He obtained his medical degree from the University of Vermont (Burlington) in 1891.

Young Doctor Campbell came to Butte, penniless, in the spring of 1892, quickly rising to prominence not only in Butte but throughout the west. By 1896 he was a state representative to the American Medical Association. He was elected Recording Secretary of the Rocky Mountain Interstate Medical Association in 1899, and likely was instrumental in bringing that group to Butte for its second annual conference, August 28-29, 1900. He seems to have accepted the office in the RMIMA reluctantly but with good humor, saying “I believe I owe the Association my thanks for electing me to this office but I think it was done more to get even with me than anything else and some time I shall get even with the man who suggested my name.”


Campbell was a founder of the Silver Bow Medical Association and served as its vice president in 1900-01. He maintained his office in his home at 307 West Broadway, an ornate house in a section called the Mediterranean Block. The core of that house dates to before 1884, when it was a small, T-shaped one-story home. Campbell expanded it in 1896, adding the second floor and some of the embellishment, although much of the present Spanish Revival appearance dates to a second major remodeling in 1916.

Dr. Campbell became the personal physician to copper king F. A. Heinze sometime in the late 1890s, a position that undoubtedly contributed to his fame and fortune. He was also the local physician and surgeon to the Northern Pacific Railway. By 1905, he no longer maintained an office in his home, as he had become an officer, and eventually President, of the Murray Hospital (at Quartz and Alaska Streets). See also these posts on the Murray Hospital and Dr. Murray.

He married fellow Nova Scotian Jessie F. Jeffreys at Hunter's Hot Springs, Bozeman, in 1893. Campbell died February 5, 1925, and is buried in Mt. Moriah Cemetery. Jessie lived until 1943. Today, his home is occupied by another member of the medical profession—a dentist.