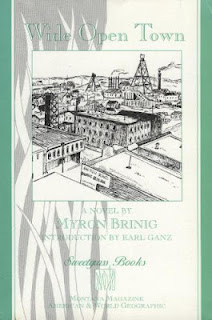 by Richard I. Gibson

Jewish, gay, and of Romanian ancestry, author Myron Brinig was born in Minneapolis in 1896 but spent his childhood in Butte (1897-1914). The Brinigs lived at 814 West Granite, a little blue miner’s cottage that survives today, and Myron’s father Maurice (known as Moses), a Butte dry goods merchant, gave Myron his model for Singermann, one of the main characters in his novels.

The Sisters, set in part in Butte fictionalized as Silver Bow, Montana, became a 1938 feature film starring Bette Davis and Errol Flynn. But Brinig’s best characterization of Butte is Wide Open Town, first published in 1931. That book among others led critics to call Brinig one of the leading young writers in America in the 1930s.

Three novels recount Butte life in the 1910s to 1930s: Richard K. O’Malley’s Mile High, Mile Deep, Ivan Doig’s Work Song, and Brinig’s Wide Open Town. While all three are interesting and entertaining portrayals of Butte, my favorite is Wide Open Town, set about 1910. Virtually all of the action takes place in Uptown Butte, and the main characters walk all over – just as I do. I especially relate to Irish immigrant Roddy Cornett, a spieler, who makes his living as a walking, vocal advertisement calling out shopkeepers’ deals on the streets. His nephew John Donnelly falls in love with Zola, a prostitute; one of Brinig’s most lyrical passages describes their outing on Big Butte. “The sun was swimming down the sky into the comfortable, golden placidities of the afternoon. The east was mellowing; the west more fiery. Where does the sun go when it leaves off this sky? Perhaps in Ireland it is morning now, or deep night…”

The New York Times reviewed Wide Open Town in 1931 thus: “In recreating life in [Butte] during the heyday of miners and prostitutes and saloons, Mr. Brinig writes with the throttle wide open.” In the introduction to the 1993 Sweetgrass Books edition, Earl Ganz quotes Montana historian and author H.G. Merriam describing Brining: “He's not really a Montana writer. He's a Butte writer. That's different.”

Brinig spent most of his life in the artist colony of Taos, New Mexico, and New York City, where he died in 1991.
Posted by Richard Gibson at 12:22 PM